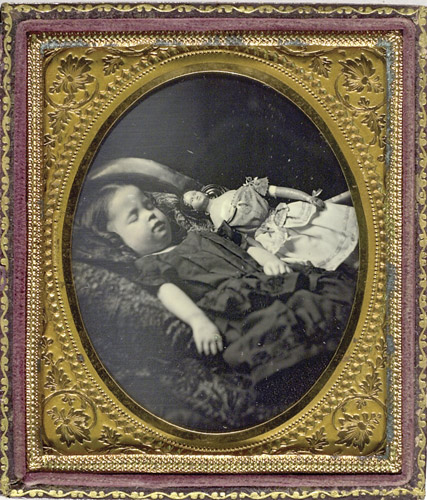 Why He Bought the Dolls.

A group of three little girls stood before the window of the toy store and gazed longingly at a display of dolls. A kind-looking man noticed them, and soon each little girl went merrily away with a doll in her arms, bashfully telling her thanks to the man. He lingered behind to say:

“The little ones like dolls, and when I see them looking at them, I can’t help stopping and getting some for them. It gives me a sad sort of pleasure.”

“My little girl liked dolls—it seemed as if her whole soul was bound up in them, almost. And she was such a little thing, too. But she played with them almost continually, and took so much comfort with them, especially one small wax doll, with its hands broken off and one foot missing. Yes, and its nose was badly worn and its hair had been put up in the very height of fashion so many times that it was nearly worn out, too. All her dolls had names and this one she called ‘Tatie’—she meant ‘Katie,’ but she wasn’t old enough to talk very well. Every night when she went to bed she must have ‘Tatie’ in her arms, and she would take it so, all night. Then when she was taken sick ‘Tatie’ must lie in the little white bed beside her and nestle in her arms at night. And ‘Tatie’ must have some of the medicines, too, and part of the little delicate dishes the loving hands of her mother brought her.

“And as she grew worse she told us that ‘Tatie’ was weaker, and showed us how much paler her poor marred face and worn-off nose were. And every day she held ‘Tatie’ more and more closely in her arms. So we sat by her bedside and knew, hard as it was, that the little angel of our household was going away, and that the closer she hugged ‘Tatie’ in her slender, wasted arms, the faster she was slipping from us. And at last she grew so weak that she could scarcely move, but her arms clasped tighter if we tried to take her ‘Tatie’ away from her. One night I had lain down on the sofa, worn out with watching, and in a little while my wife woke me with a soft touch, and her tears fell on my face, and I knew what it meant. And when we went back in the bedroom our little girl lay there still and calm, and ‘Tatie’ yet in her arms with the scattering, half-worn hair pressed against her pale, wasted cheek. They put her in the little coffin, and when I looked ‘Tatie’ still nestled in her arms.

“So that is why I stopped and bought the little girls some dolls, though I never saw them before, and if they take half the comfort with them that my little girl did I will be more than repaid.”

Mrs Daffodil’s Aide-memoire: The reader will have to excuse Mrs Daffodil. She has something in her eye….

This is an excerpt from The Victorian Book of the Dead, by Chris Woodyard.