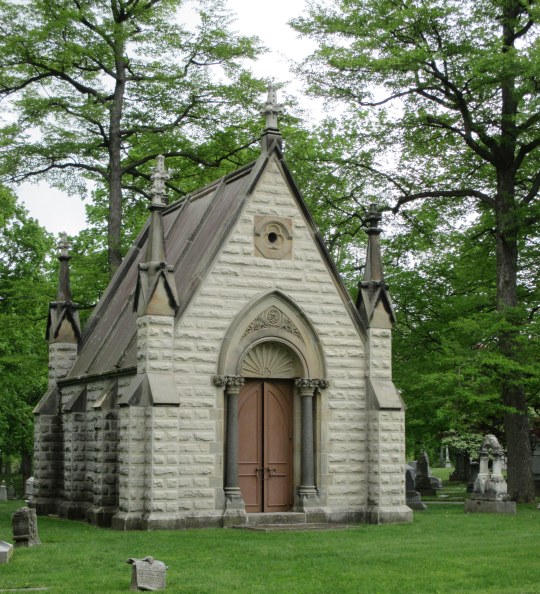 MARRIED IN A CEMETERY

At the Foot of the Grave of the Bride’s Mother.

Queer Ending of a Romantic Wooing

No stranger wedding ceremony was ever performed than the one which on a recent Sunday united Alfred Scammel and Mary Moulton in Blue Rapids, Kan., They stood hand in hand at the foot of a grave in the Oak Hill cemetery and were there made man and wife, at the grave of the mother of the bride, who had blessed and approved the union, but who died before she saw the pair united.

The little company gathered there in the city of the dead looked strangely solemn in the fading light of the February day and there was little to suggest the gayety of a wedding in the solemn words of the minister or the grave faces of bride and groom.

For many years Miss Moulton, the bride, had been fatherless and between her and her mother there had grown up an intimacy and affection different in many ways from that ordinarily exhibited by mother and daughter. They were more like loving sisters. They were friends and companions and the tenderness and devotion each exhibited toward the other had often been remarked by their friends.  And when over a year ago Albert Scammel came a-wooing and wrought himself around the gentle heart of the daughter until she felt her life would not be complete without him, the mother joyed in the union and blessed it and said it was well. She entered into all the preparations for the crowning event in the life of her daughter with more than a mother’s zeal and devotion. She was as earnest in her work for the happiness of Mary as though it were her own nuptial day which was approaching.

The wedding was set for February 13 of last year. The guests were bidden and the feast was set and it remained only for the words of the minister to join the lives of those who had chosen one another from all the world for all time. Then came sorry and suffering and the gaunt hand of death. On the eve of the wedding the faithful mother was stricken with illness and the wedding was postponed. She grew rapidly worse and on February 13, the day set for the ceremony, she passed away. The shock of her mother’s death almost carried away the bride-to-be. She withered under it and when at last she began to recover her health and strength she went every day to the cemetery to kneel upon the sod which sheltered the mortal remains of her whom she loved so dearly and to pray for her eternal happiness.

The young man came with her, he who was ready to cleave to her in sickness and death, and, kneeling there on that green mound, it came to them that it would be fitting they should be wedded there above the mother’s grave and on the anniversary of her death. Thus it came about that this strange ceremony was performed in the acre of mourning amid the gleaming headstones and the weeds of sorrow. A few friends were bidden to the wedding, and when they were assembled at the grave the young man and the young woman came down the avenue of bare and leafless trees hand in hand. At the foot of the grave they halted and the minister, standing in front of the marble shaft erected in memory of the mother, made them man and wife.

Thus was the idea of this odd service carried out. The church was beautiful. Oak Hill cemetery; the lights were the slanting rays of the sun playing hide and seek with the shadows of the great trees; the flowers were the loving mementos placed upon the mounds of the sleeping dead; the music was the soft carol of birds and the requiem of a gentle wind, and the altar was a mother’s grave.

All around the little company were the graves of the dead; above them arched the blue sky; the tender charms of nature were everywhere displayed; the sounds of priestly prayer and orphan’s sigh, gentle breeze and twittering birds mingled in an anthem from nature to nature’s God, and the fast declining sun, in a final burst of gold glory; gilded the mother’s monument and shone radiantly upon the young bride like a benediction.

Mrs Daffodil’s Aide-memoire:  Mrs Daffodil, who is never surprised by the morbid vagaries of the human race, has heard a number of stories about couples plighting their troths over coffins, in coroner’s offices, and in burying grounds. In Russia, a notoriously superstitious land, a cemetery marriage was supposed to stop an epidemic.

In Witepsk, Russia, in order to stop the ravages of the cholera, two couples were married in a cemetery. The ceremony attracted a crowd, and the epidemic increased. Magic circles were drawn around some of the villages, and various heathenish incantations resorted to, but still the disease gathered in its victims. Then the Israelites were forbidden to call in doctors, and the mortality became frightful. How the epidemic as arrested is not told.

Any number of historic cemeteries have designated special areas where weddings may be held in romantic gazebos, under ancient trees, and by tranquil lakes.  Recently, when Mrs Daffodil was visiting a local graveyard, which advertises that it hosts weddings, she saw a pretty clearing where a Chinese bridge spanned a little pond. It was a simply perfect location for the nuptial photographs–except that the picture was rather spoilt by a miniature spinney of birches just below the pond, marked by a discreet sign denoting it as a place to scatter a loved one’s ashes.

More on strange doings in cemeteries may be found in The Victorian Book of the Dead.