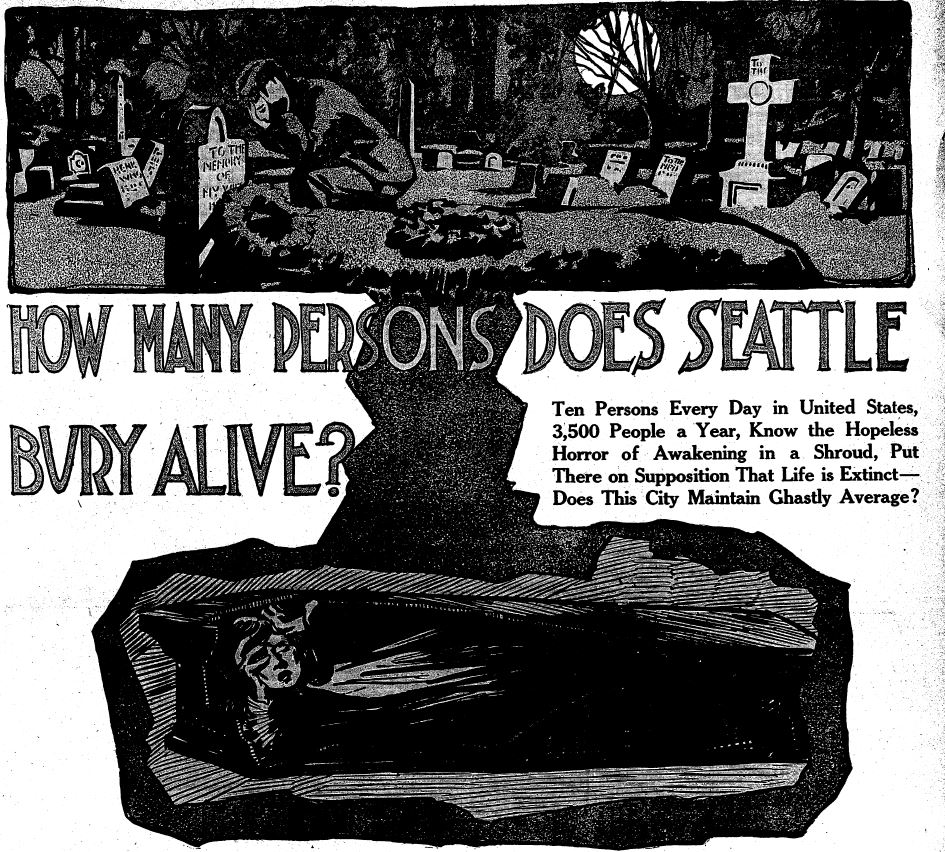 Continuing our grewsome theme of burial alive is this proposal from Bridgeport, Connecticut, for an organization that would hold the bodies of the dead until they showed unmistakable signs of decomposition. In short, German waiting mortuaries: the Leichenhaus or Totenhaus.  For whatever reason, these never caught on in America. I’m not sure if it was some inherent squeamishness in the American character, a reluctance to commit to the expense or the real estate, or a practical realization that while there were plenty of false alarm bells rung by the gases of decay in the Leichenhauser of Germany, no one ever got out alive.

Bridgeport People Who Will Not Be Buried Alive if They Can Help It.

Bridgeport, Conn., Oct. 15. The first of next month a meeting will be held at the rooms of the Scientific Society to organize a Humane Burial society. One of the promoters of the scheme when asked as to the objects of the organization last evening said: “You may not know it perhaps, but in Bridgeport and all of the country, there are a great number of people who have a nervous dread that they may be buried alive. Probably I could name 100 of my personal acquaintances who cherish this awful fear, and there are plenty of cases to show that such an apprehension is not without foundation. What the projected society proposes to do is to take charge of the remains of deceased persons or those supposed to be deceased, and care for them for a sufficient length of time and under conditions which will make their being buried alive an impossibility. The awakening of public interest on this subject is another one of our objects. To most people the idea of establishing such a society will doubtless seem very strange, and did I not know how many people in Bridgeport feel about the matter the same as myself I should hesitate about taking any active part in the movement.” The speaker was reminded that the danger of being buried alive was thoroughly discussed by the Scientific Society a few years ago, and that the weight of medical evidence introduced went to show that the apprehensions alluded to had in reality very little foundation.

“That is true,” was the response, “but that proves nothing. In fact the medical fraternity now virtually confess that none of the old accepted tests used to determine whether the vital spark is really fled or not, can be taken as conclusive. The absence of warmth in the body, the apparent absence of circulation, the eye test, the test with the mirror held before the respiratory organs, and in fact all the other familiar tests, have been proven defective in well authenticated cases. Sometimes by a lucky accident, and sometimes through an apparent excess of caution, persons pronounced by high medical authority to be dead have emerged from the trance condition which gave the simulation of death. Most of the best medical men will tell you today that the only positive proof of death, one that cannot lead to a mistake under any circumstances is the setting in of decomposition. The aim of the society about to be organized is to apply to our members and such others as we may accept the charge of, this only and absolute test. Such an object is worth working for even if it falls to the lot of only one in 10,000, or even one in 100,000, to suffer the terrible doom of being put under ground while alive. We know that many have suffered this fate; how many such cases there have occurred not known of, nobody knows. As I have said, the number deeply interested in this subject is more than would naturally be believed.”

The unnamed spokesperson makes a good point about the medical profession’s uncertainty about the certainty of death. Despite modern medical advances, the controversy continues even today. My question is, did this plan to hold the bodies of the dead of Bridgeport ever get off the ground? I can find no evidence that it did, but perhaps they purchased a holding vault somewhere and began on a modest scale rather than the palatial Leichenhauser of Germany.

If you have dug deeper than I and know whether the corpse-holding organization was ever active, let me know at chriswoodyard8 AT gmail.com

3 thoughts on “Know When to Hold ’em: Waiting Mortuaries in Connecticut”