Women readily exchange their winter garments for those suitable to summer; but, under circumstances of mourning, they are cruelly compelled by custom to move about under a load of black crape. It is to liberate them from this misery that the present article is written.

Many widows suffer from nervous headache in consequence of night-watching, anxiety, and grief; and this form of headache is converted into congestion of the blood-vessels of the head by exposure to the sun in black bonnets and dresses . There are numerous instances of widows remaining within doors for months together, to the great injury of their health, rather than endure the misery of sun broiling.

The remedy is very simple.

There is such an article as white crape; but it indicates slight mourning. Either white crape should be worn as summer mourning, or small-sized black edging to light-coloured dresses; and bonnets should be introduced into general use for the purpose. 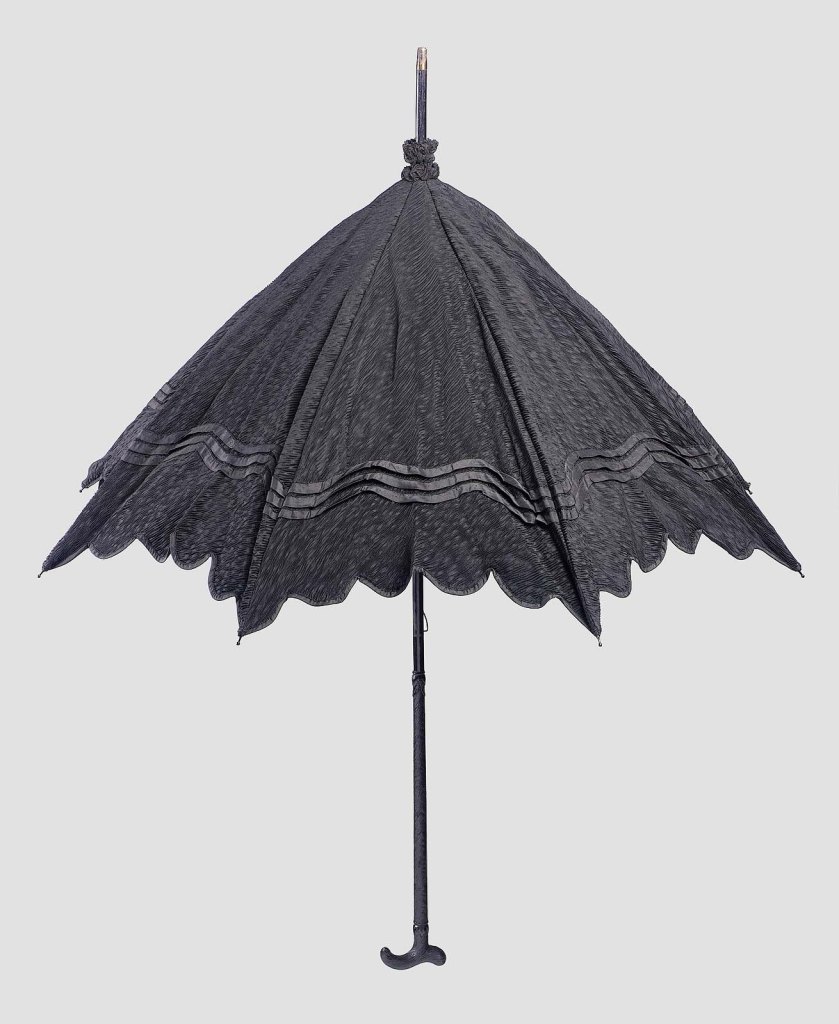 If in summer a parasol should be required, it should be of silk deeply trimmed with crape, almost covered with it, but no lace or fringe for the first year. Afterward mourning fringe might be put on.…. Collier’s Cyclopedia of Commercial and Social Information, Nugent Robinson, editor, 1882

Summer or winter, there was no consensus as to whether children and infants should go into black.

Though it is the custom to put children into black on the death of either parent, no crape is used on their gowns or coats or hats; and in summer they wear white with black ribbons. Children under ten do not wear black for any other relative. Young girls, even when in deep mourning, are permitted to wear white in summer, with black belt, tie, &c.; and for evening dress they can wear white. It may seem anomalous, but white is much deeper mourning than grey; the idea being to wear “no colour” and to attract as little notice as possible. Etiquette for Every Day, Mrs Humphry, 1904

The magpie contrast, which is the name given to the effect when black and white are brought together, is revived with great favor for the summer girl who is entering the second stage of mourning.

A near, but none the less dainty, magpie contrast is here portrayed. The toilette is developed in white dimity traced in swirling design. The tracery is of black silk somewhat raised, giving the effect of the new needle cord, which is seen in many of the nonwashable summer goods.

The skirt is gored to insure a smooth fit over the hips, and the fullness is underfolded at the back. It is sewed upon a waistband of black mourning silk ribbon which necessitates no other belt. Bands of the ribbon in a narrower width than the belt extend halfway down the sides of the skirt. These are caught by a rosette or ribbon or left to fly to the winds, the latter mode being more generally adopted because of its summery effect.

So great is the dislike for a summer veil that many are leaving it off, though others feel more comfortable if the mourning hat or bonnet is properly veiled. For such head dress, the bonnet or hat proper is covered with ordinary black crepe, though the face covering is a very thin black chiffon. While these hats signal woe to the whole wide world, nevertheless they are graceful and to many quite becoming. The shapes are quite different from what they once were and some are really very artistic, though not noticeably so by any means. Wilkes-Barre [PA] Times 25 June 1908: p. 8

For the ordinary run of people, the most serviceable dress is of black voile, and the changes may be rung with the woollen, silken, or cotton makes of it, according to the means of the purchaser. Black cotton voile will be used later on for half-mourning frocks, and it is a fabric that will probably be responsible for some of the most attractive frocks all the summer through. There are plenty with striped effects and floral patterns—black and white, white and black, grey and white, white and grey, to say nothing of all the varying hues of mauve and lavender—but such are not orthodox for immediate wear. New Zealand Herald, 2 July 1910: p. 6

Mrs Daffodil’s Aide-memoire:  Nothing is more trying for the bereaved than the burden of bombazine and crape in midsummer’s heat. Not only is the costume excessively warm, but perspiration often causes the black dye to stain the face beneath the veil, a distasteful and unhygienic situation. There were few alternatives if one wished to be “correct.”

The King’s kindly thought in shortening the period of mourning by a full month will be greatly appreciated, not only by those who would have had to buy a complete summer outfit of black, but more by the tradespeople whose large stocks, bought months ago, would have presented only dead loss.

Full mourning now is only to last until June 17th, and half-mourning may end on June 30th, so that there will be little hardship in putting off the donning of summer finery for so short a time out of respect for the memory of the late King. New Zealand Times 6 July 1910: p. 11

White mourning was one possibility for the summer mourner, if one did not mind controversy:

All-white crepe is now advocated by a New York fashion writers for widows during the summer. She says: “For a summer outfit for a young widow gowns trimmed with white crape, made of white crape, hat with a long white crape veil, a white crape parasol and everything to match, is immensely smart, and, be it added, very becoming.” Imagine such a thing! The uninitiated would surely wonder what a woman so attired was trying to impersonate. She would seem a cross between a bride, wandering about without her bridegroom, and a tragic actress doing Lady Macbeth off the stage.

The aforementioned New York writer of fashions must be possessed of a sense of humor which is, in vulgar parlance, “a dandy.”

There are widows to-day who do not wear mourning as is mourning at all, but at least they do not make themselves conspicuous in a bizarre costume like that described.

The white mourning costume is never likely to be popular until women lose their ideas of appropriateness altogether. Charlotte [NC] Observer 1 July 1903: p. 7

A woman, who is in “second mourning,” hit upon a dainty idea for her summer clothes. She is wearing white this summer, but instead of the inevitable white shoes, she’s “gone in” strongly for gray shoes and stockings—silver gray—and is wearing exquisite belt buckles of silver as the only other note of color about her costume. The silver and white effect is stunning.” The Indianapolis [IN] Star 1 July 1905: p. 9

Mrs Daffodil will add what is perhaps the most vital hint on summer mourning. She has shuddered at white underthings under black voile and can vouch for this statement:

All the sheer black materials may be used, but black muslin or cambric underwear should be worn beneath them, for nothing is uglier than black over white. The San Francisco [CA] Call 10 July 1910: p. 20

One may read more about “correct mourning” in The Victorian Book of the Dead, which describes, among other abominations, a mourning bathing suit.