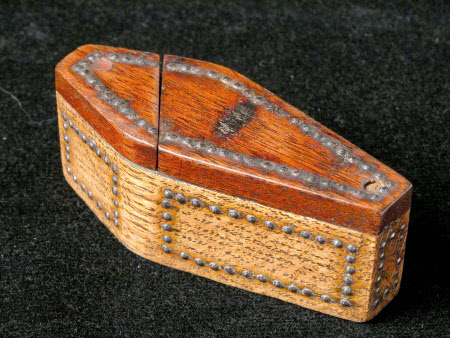 Military Secretary at Denver Startled by Package from Crank

Denver, Colo. Nov. 7. When Lieutenant Colonel Thomas F. Davis, military secretary of the department of the Colorado, United States army, opened his mail a few days ago he came across a large brown registered envelope, sent from Cripple Creek, and addressed to the army headquarters, Denver. It weighed perhaps half a pound.

The colonel opened it hurriedly and then jumped. For out of the envelope fell the model of a coffin, cut from a cigar box, and covered with black satin which had been cut and pasted on with mucilage.

The coffin was written over with strange devices and a couple of sheets of writing paper, scrawled over from top to bottom with daggers and skulls and cross-bones. Visions of bombs like Jacob Schiff got and of the Black Hand and of the Ku-Klux clans flitted across his brain as he rang for an orderly and a pail of water.

Further examination proved the package to be less dangerous than it looked. The writing was unsigned, and accepting that the package was sent from Cripple Creek, there was nothing to show who or what the sender was. The greater part of the writing was unintelligible, although here and there enough could be made out to show that the writer, evidently insane, had a fancied grievance against the army, and was threatening it with annihilation. The coffin, he explained, was sent to hold the general staff when he got through with them.

Colonel Davis returned the package to the postal authorities, marking on the cover, “Not intended for army headquarters,” and coffin and all are now in possession of the registry department. Post office inspectors are making an investigation of the affair. The sender is believed to be a harmless crank, although the orderlies at headquarters have received instructions to take no chances with queer looking individuals who visit headquarters in the next few weeks.

Miniature coffins  were usually recognized as a threat, not unlike the practice of a gangster sending funeral flowers to a rival.

Jacob Schiff was the head of Kuhn, Loeb and Company, one of the world’s largest banking houses. Anarchists sent an “infernal device” to his office, which was discovered when the black powder leaked out one end.