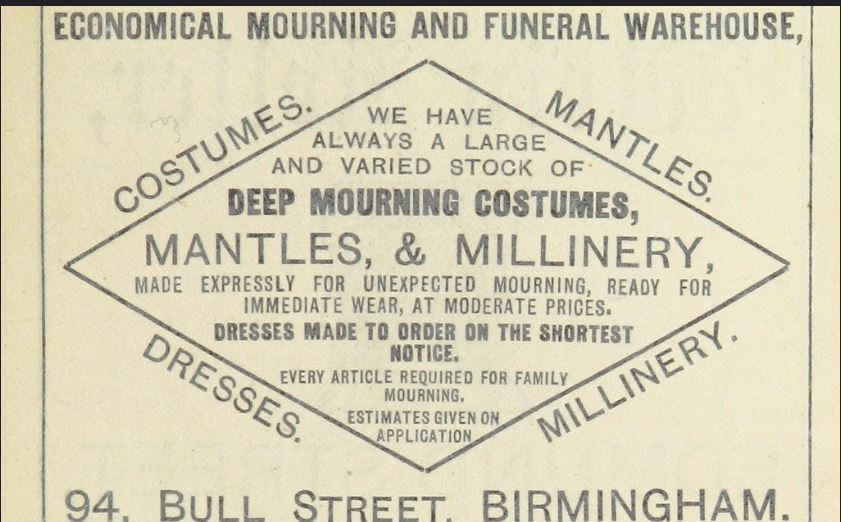 MOURNING CLOTHES AS A SOURCE OF INFECTION.

I should not presume to call the attention of your readers to the possibility, not to say probability, of infection being disseminated by the use of hired mourning clothes, if it were not that this possible source of infection appears to have been altogether overlooked by sanitarians and health officers.

My attention was first called to this subject some time since. I was visiting a poor person’s child suffering from scarlet fever; the case was an isolated one in the midst of a densely populated neighbourhood and my efforts were at once directed to the discovery of the source of infection. On investigation I could only find one likely source of infection, viz., that an aunt of the child had been to the funeral of a scarlet-fever patient, had returned home with the mourning clothes on, and had taken the child on her knees to nurse it. The aunt unhesitatingly attributed the infection to having neglected to exchange her mourning for her every day clothes. In fact the original idea that mourning clothes could convey infection was hers not mine. I am not inclined to place much reliance upon the opinions of the working classes on sanitary matters, especially when such opinions are the results of attempts to reason, but, when such people do not reason or attempt to reason, a sort of natural instinct will often lead them to very accurate conclusions. I have no doubt that in this particular instance the woman was right; knowledge of the social customs of her own class led her to detect a source of danger which I had not until then suspected. By a few questions I elicited the fact that the practice of hiring mourning clothes for funerals was common amongst the working classes in my district.

By subsequent inquiries I ascertained the following facts:

I can vouch for these three practices being common in my district, and have little doubt that similar customs will be found to exist in other poor districts, by anyone sufficiently interested to inquire.

If a modern Asmodeus could follow the travels of some of these hired garments, he might introduce us to some strange scenes and to some strange people, we might see some of the darkest phases of human misery, some of the most grotesque forms of expressing sorrow for the dead, and some of the most unwholesome social customs; the sanitarian might have many strange facts disclosed bearing more or less upon public health.

Amongst the very poor, comforts and even necessaries during life have to make way for the requirements of a decent burial. I have frequently been surprised at the inconsistent display of pomp at the funeral of a pauper, who had died in the workhouse, but whose relatives shrank from the last disgrace of a pauper funeral. How to reconcile the so-called ‘ decent burial’ to very limited means is a social problem which has been solved by the mutual kindly feeling of the poor towards each other in times of trouble, and by the practice of hiring instead of buying mourning. To the initiated a good funeral need cost but a very small sum.

It is not my wish to expatiate upon the desirability of simple and inexpensive funerals, especially for the very poor, but rather to show that many mysterious outbreaks of infectious disease may be accounted for by the practices alluded to above.

Such a train of circumstances as the following are far from infrequent in my district: one or more members of the same family are afflicted with scarlet fever, measles, or some other infectious disease, a bed is made up in the ordinary day room for convenience of the mother who has other duties besides those of nurse to perform. One child dies and arrangements are made for a funeral. The guests assemble clothed in hired or borrowed mourning in the very room where another living child is still a centre of infection. The funeral over, the mourning is returned to the owners and lenders without disinfection. This is not a fanciful case, and I could multiply examples if there were any advantage in so doing.

Having now pointed out a possible, and in my opinion a very probable and frequent source of infection, I will briefly refer to the practical question which more immediately concerns the medical officer of health, viz., how to guard against the danger. This question is not so easily answered as might at first sight appear. The 126th clause of the Public Health Act gives ample legal powers, but legal proceedings should be the last resource of preventive medicine.

In some districts hospitals exist to which infectious cases can be removed, and means of disinfection are provided at the public expense, but a vast number of sanitary authorities have not hitherto taken any steps in either direction.

Assuming that means of isolation and disinfection are both provided, the next difficulty, probably the greatest, is to prevail upon the poorer classes who are most concerned to avail themselves of them. A singular affection is often developed by illness towards those who in health may have been sadly

neglected; parents refuse positively to allow their children to be removed from their care, and cannot be persuaded to part with them for a time, however much it may be for their own good. This circumstance I frequently observed during the last small-pox epidemic. About two years since I was required to visit a woman who had just been delivered, and I had the greatest possible difficulty in procuring the removal of a child suffering from malignant scarlet fever, who was actually in the same bed.

Again, as regards disinfection, there seems to be a want of faith in its efficacy, perhaps, with too good reason in many instances. Poor people will run any risk of infection rather than sacrifice useful garments. They are fully alive to the value of clothing, but are sceptical as to the value of disinfection. It seems to me, therefore, that whatever system of disinfection is adopted, the materials submitted must be neither injured nor destroyed.

If compulsory powers as regards isolation and disinfection were exercised, especially at the very inopportune time of a funeral, they would be met by concealment and a secret stubborn resistance. A woman who candidly admitted to me that her son’s trousers had been out at funerals for a fortnight, would not have made such an admission had I previously explained to her the possible penalties which might have been incurred under the 126th section of the Public Health Act. I believe that one or two successful prosecutions would render it almost impossible in a district to obtain the necessary evidence for future ones.

I hold strongly that the first steps towards stamping out the spread of any infectious disease should be taken by the sanitary authority. Means for isolation and systematic thorough disinfection ought to exist in every district and combination of small districts. Then undertakers and second-hand clothes dealers ought to be cautioned against lending or selling any clothing likely to have become infected, and prosecuted if wilfully careless. The private lending system amongst neighbours and friends would be still a difficulty; free disinfection (without injury to the garments) might be urged by handbills or other means. I trust that these few remarks, however crude and imperfect, may suffice to direct the attention of other health officers to the subject of mourning clothes as a source of infection, and I think it more than probable that in addition to ordinary zymotic disease, some forms of skin and parasitic disease, and even venereal disease, may be traced to funeral customs amongst the lower classes.

Mrs Daffodil’s Aide-memoire: Mrs Daffodil dislikes contradicting a district Medical Officer, but fears that Dr Hatherly’s education has been neglected if he believes it likely that venereal diseases may be acquired from hired garments. Nothing is impossible in this world, (and Mrs Daffodil can, regrettably, envision a person with inadequate undergarments donning hired trousers) but although small-pox and the plague have been passed via textiles, the likelihood of catching the pox from a mourning veil is so slight as to be non-existent.  Dr Hatherly, with his contempt for the reasoning powers of the lower classes, seems to have a bee in his (mourning) bonnet.

Even the “lower classes” felt pressure to conform to the rituals of “upper-class mourning.” Households often went into debt to furnish themselves with proper mourning costume and there was much clucking from the philanthropic classes over mourning excesses committed in the name of propriety. However, some widows were bullied into compliance, as in this example:

A superior servant, a mere girl, married a house-painter. Within a year of the event the husband fell from a ladder and was killed. The poor little widow bought a cheap black dress and a very simple black straw hat to wear at the funeral. Her former employer, who had much commended this modest outlay, met the girl a few days later swathed in crape, her poor little face only half visible under the hideous widow’s bonnet complete with streamers and a veil… She explained that her neighbours and relations had made her life unbearable because she did not want to wear widow’s weeds and at last she had to give in. “They said that if I would not wear a bonnet, it proved we were never married,” she sobbed.  Funeral Customs, their Origin and Development, Bertram S. Puckle, (London: T. Warner Laurie, 1926)

Mourning warehouses and hired clothing were not the only ways to aquire mourning dress. Lou Taylor, in her admirable book, Mourning Dress, A Costume and Social History, tells of a simple black wool dress, shawl and bonnet, which the Dockers Union, London, loaned out to members’ widows from 1880 to 1914.

For more about mourning costume, ritual, and oddities see  The Victorian Book of the Dead, also available in a Kindle edition.

See this link for an introduction to The Victorian Book of the Dead, a collection about the popular culture of Victorian mourning, featuring primary-source materials about corpses, crypts, and crape. Various excerpts from the book may be found on this site under the topic of “mourning.”

One thought on “Mourning Clothes as a Source of Infection: 1877”