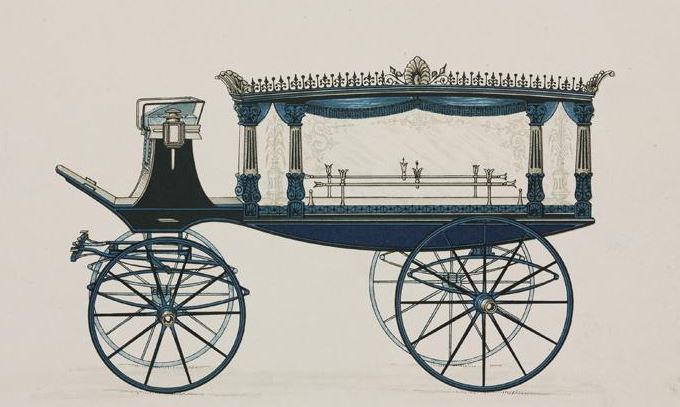 A strange wedding tragedy was the subject of investigation by the Plymouth, England, coroner yesterday.

On Wednesday Mary Dicker, the wife of a laborer, set out with her husband and daughter for the church where the latter was to be married to a young man named Menhennitt. On their way the wedding party met a funeral procession, and Mrs. Dicker was so much affected by this evil omen that she trembled violently all the way to the church, and declared that some calamity was bound to follow.

In the evening the bridegroom’s father gave a wedding party, and Mrs. Dicker, who seemed by that time to have recovered form her fright and to be in the best of spirits, was asked to sing a song. She did so, while still sitting in her chair.

In the middle of the song she fell forward and it was thought that she had fainted. She was carried into an adjoining bedroom, and a doctor was sent for, but before he arrived the morning’s ill omen had been fulfilled and she was dead.

It appeared that she had suffered a good deal from heart trouble, though the symptoms had disappeared during the last 12 months. Dr. Croft Symons stated that death was due to syncope brought on by the excitement of the morning.

A verdict of “death from natural causes” was recorded.

It was a popular superstition that seeing a hearse or a mourning coach on one’s wedding day was a deadly omen for the marriage. There was also a belief that a bride who saw a hearse on her wedding day would lose all of her children.

On a foggy morning last week…a bridal party consisting of two young women with enormous bouquets, and two very nervous looking young men, drew up in a four-wheeler at the entrance to a registry-office, situated in one of the meanest of the mean streets off Islington. Just as they were all alighting, a hearse, meandering along in the fog, collided with the cab, and for the moment the wheels became interlocked. Bridegroom, bridesmaid, and the best man were in no way disconcerted. But, alas! For the poor little bride the harmony of the day was broken. Bursting into tears she declared that nothing would induce her to get married “with a hearse for an omen.” And neither laughter, chidings, nor entreaties served to shake her resolve. Back into the cab she got, bouquet and all, and in a few minutes the very woe-begone quartet drove off. Inangahua Times, 7 April 1897: p. 4

The Islington bride sensibly postponed the festivities, while the following bride did not. A word to the wise…

Portsmouth, Eng. While a Portsmouth woman was going to church on her wedding day her taxicab overtook a funeral procession. She regarded it as an ill omen and was disposed to postpone the ceremony, but was dissuaded by friends. The bride, however, was depressed. A fortnight after she became ill and died. Wilkes-Barre [PA] Times 16 September 1920: p. 16